Philip Marcus spoke at a Seminar organized by the Social Work department at Tel Hai Academic College on the topic: “The Range of Social Work Interventions: The Case of Parental Alienation”. You can watch his lectures and the panel discussion in which he participated (in Hebrew) here:

Philip Marcus was invited to speak at the Get Help Israel Clinicians’ Essentials Seminar and Jerusalem Regional Networking Event for Mental Health Professionals on May 5, 2019.

As part of the GHI Seminar entitled: “Everything You Need to Know But Don’t… How to Work (Within) the System in Israel”, Philip spoke about “Confidentiality and its Limitations” .

At the same Seminar, Tova  Schenkolewski from the Jerusalem division of the Revacha (welfare department) spoke about how and when to report abuse or neglect. Batya Leidner, the senior director of housing services in the Ministry of Health Mental Health services Rehabilitation department, explained the government benefits and services that are available for people with mental illness, and the process for receiving those benefits. 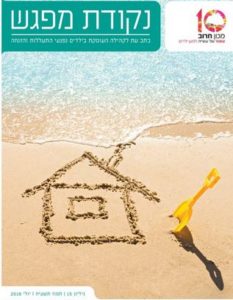 Philip Marcus was interviewed for the Jerusalem Post Magazine in August 2018 as a Veteran Oleh, about his decision to make Aliyah, and his experiences of living and working in Israel as a judge.

Click here to read the article in PDF format. 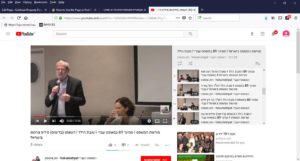 Read about Philip Marcus’s career, as described on the website of his alma mater University College London:

I read with dismay about the abolition of Legal Aid for most matrimonial cases in the UK.

After my admission as a solicitor in late 1995, and until my departure for Israel in summer 1978, I represented litigants in scores of cases, civil and criminal, under the legal aid scheme. I was among the founder members of the Tottenham Magistrates Court Duty Solicitor scheme, under which solicitors saw defendants who were appearing for first remand hearings, under the Green Form (which allowed us to take instruction as to the means of the defendant and do up to 25 pounds worth of work if satisfied that legal aid was justified, without referring to the law society for approval).

But much of the work was matrimonial. (If my memory of the history serves, legal aid was founded to assist in divorce proceeding for soldiers returning after service abroad in World War II, and only later expanded to cover other areas and replace the dock brief in criminal cases).

Israel has a legal aid scheme, means tested of course, and throughout my career as a lawyer I represented clients under this scheme in hundreds of cases, at all levels, including the Supreme Court. But what I have to say here also reflects my work as a judge of the Family Court, dealing with those comparatively few cases where one or both of the parties were unrepresented.

Legal Aid, if properly administered, has two great advantages in matrimonial proceedings, above and beyond representation in and of itself:

The first is that it enables young lawyers, at the start of their careers, to get valuable experience in interviewing clients and preparing pleadings, and appearing in preliminary applications, and even trials at the County Court and Domestic Proceedings Court and Magistrates Court. For myself, I can say that I learned many lessons in advocacy as a young lawyer, which I would not have learned were it not for the opportunities afforded by legal aid.

But more importantly, it saves court time, at two levels: that of the court secretariat, and that of the judicial officer.

The secretariat is relieved of the need to inspect each document filed for compliance with procedural rules and basic comprehensibility, and to explain basic principles to litigants in person.

Cases involving non-represented litigants are a colossal drain on judge time. The judicial officer is faced with claims which, if  a solicitor had been consulted, would not have been have been filed, as being contrary to the established principles of law, and defences which are clearly untenable.

But even if the case is viable, a judicial officer will have to spend much time and energy explaining each procedural stage and each evidentiary issue (some of them somewhat hard to understand even to an experienced lawyer) to the litigants, and worse than that, to assist in the presentation of the case without knowing all the facts which might have assisted one of the parties if  they had been pleaded, or about potential witnesses. In this regard, the almost impossible task of remaining impartial is exacerbated where one of the parties is represented: the unrepresented party needs even more assistance, particularly if the lawyer is less than scrupulous.

The inevitable result of removal of legal aid is a substantial increase in the workload at the administrative and the judicial level, which results in increased delays in the completion of cases; unresolved cases, especially in the matrimonial field, bring about more interlocutory application and injunction proceedings, and more stress on the minor children, who suffer most from the uncertainty and the preoccupation of the parents with the litigation. This in its train may lead to increased involvement by welfare services, with the costs that this involves. The alternative is the need for substantially increased staffing, with the associated costs. Both of these are undesirable, and increase costs to the state.

All credit is due to the judges, and especially the President of the Family Division, who have done all in their power to mitigate the effects of the cuts.

Legal aid should not be regarded as a welfare benefit that can be granted or removed according to budgetary constraints, especially where, as I point out, the saving in the cost of representation are far outweighed by the increase in cost to the state of expansion of court staffing and/or the excessive delays in finishing cases.

The state has the responsibility to provide a judicial system which answers the needs of the public. This includes representation of those who cannot afford it.

In Israel, Legal Aid is expanding its scope, specifically in the Family Law field. In the past couple of years a decision was taken to give legal aid to minors whose matters are being dealt with in the Family Court. According to set criteria the lawyer appointed decides to act as lawyer for the child (mainly older children) or to represent the child’s best interests. A manager has been appointed to deal with these cases in each district legal aid office.

Just last month, in the course of parliamentary law committee debates which led to a reform of the law regarding guardianship of disabled persons (inter alia requiring more involvement of the individual concerned and restricting the guardianship to the least injury to his autonomy), the legal aid regulations were amended to grant legal aid to these individuals.

The Israel government took these steps in recognition of their necessity in ensuring proper court action in these cases, and of the savings of court time, especially as the lawyer appointed can apply his knowledge and experience to mediation and ADR in these disputes and make of defend applications promptly and professionally.